It's not necessary to funnel through US Department of Defense layers of bureaucracy (think technology readiness levels) to create a potentially challenging weapon -- as shown by this straightforward innovation posted to YouTube in March 2016.

Now imagine deploying hundreds of these against a target.

Posted by knowlengr at 8:28 PM No comments:

US Navy To Fight Swarm Attacks with LOCUST UAV


USN research teams have run simulations and determined that certain types of attacks would leave Navy vessels vulnerable from small drones flown in good weather from multiple directions simultaneously. LOCUST is designed to address that.


'via Blog this'
Posted by knowlengr at 8:18 PM No comments: 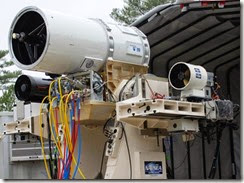 The Navy’s USS Ponce is now patrolling the Persian Gulf with an anti-UAV weapon with the official title of “Laser Weapons System.”

The Quartz report quotes NavalTechnology.com in describing the Laser Weapons System: “The system comprises a single laser weapon control console manned by a surface warfare weapons officer on board the USS Ponce, who can operate all functions of the laser and, if commanded, fire the weapon.”

Developed by Kratos Defense and Security Solutions, the Laser Weapons System can also be used against small boat attackers, and ONR is developing a similar weapon for use by the Marines for ground vehicles.
Source: @MatthewPhillips Quartz
Posted by knowlengr at 4:00 PM No comments: